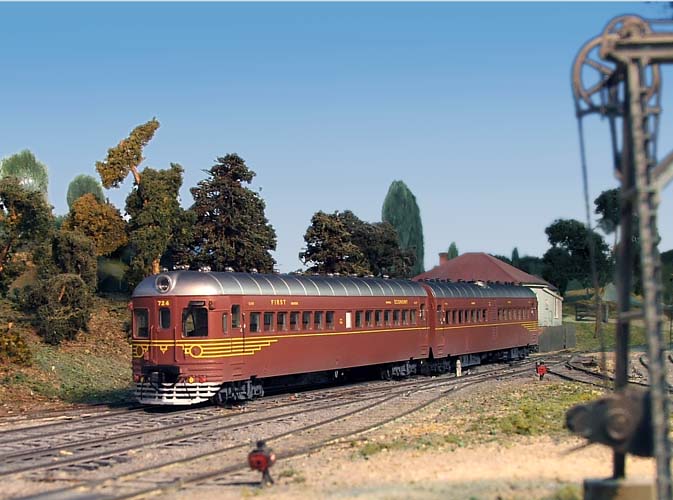 Above: Straight out of the box and onto your layout.
Eureka’s deep Indian red 620 set with factory weathering 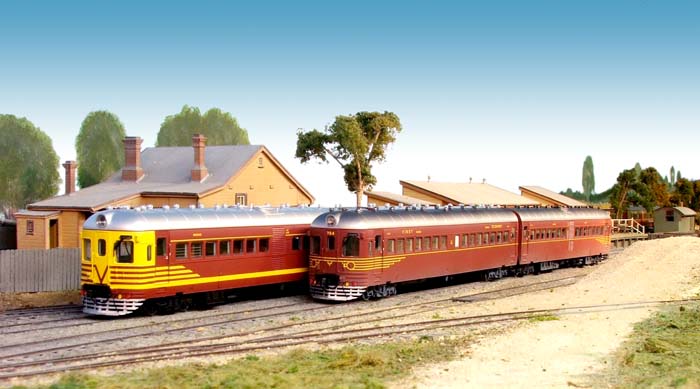 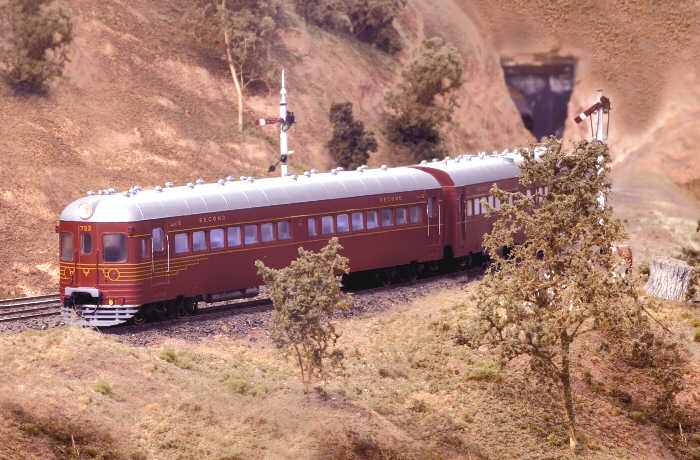 The First Run Comprised (Sold Out)

A DCC chip is included as part of the optional Factory fitted sound. Standard non-sound models will be DCC ready, but only the sound equipped models will come with a DCC chip already fitted. The sound effects will work with standard 12vDC, but far more options to control the sound will be available to DCC users An .mp3 sample of some of the sounds in the sound chip.

Following the success of the 600/700 railcar sets of 1949-50, a modified version was designed to begin the dieselisation of the Newcastle suburban services.  The new units were designated the 620 class.  As suburban trains, units 621/721 to 625/725 were built as all Second class units and coded NPF/NTF.  Units 626/726 to 629/729 were intended for longer distance services and included a first class section in the trailer car, which was therefore coded NTC.  Two further sets, 630/730 and 631/731, intended for outer Sydney suburban working, also included the NTC composite trailer.  The first six of these sets had rectangular windows in the passenger doors, as did trailer car 627.  Motor car 627 and all cars in the remainder of these sets, plus those in subsequent orders, which brought the total up to eighteen sets, had circular ‘porthole’ windows in the passenger doors.  The Eureka model therefore represents the 621/721 to 626/726 group, which entered service between September 1961 and September 1962.

They were originally turned out in a light Indian red, commonly (but erroneously) referred to as Tuscan red.  There was buff lining on the metal bands above and below the windows, as well as decorative line work at the front, which carried around onto the lower body panels.  The roof was metallic silver/grey and the undergear was black.  The gutter strip was painted black and the pilot silver.  ‘Car 1’ was painted near the doors of the motor car and ‘Car 2’ on the trailer.  The car numbers were painted in standard NSWGR shaded lettering on the outside end doors, and code, car number, smoking or non-smoking designation and class designation were placed on each side.  Handrails were polished aluminium, except for those on the car ends, which were painted in the body colour.

Between 1969 and 1971, the all Second class NTF trailers were converted to composite NTC type, and about this time the paint scheme was simplified slightly by omitting the buff line above the windows.  The car numbers in the set were omitted, with simply the word ‘Car’ beside each door, along with a bracket into which a painted ‘1’, ‘2’, ‘3’, etc. could be slotted. 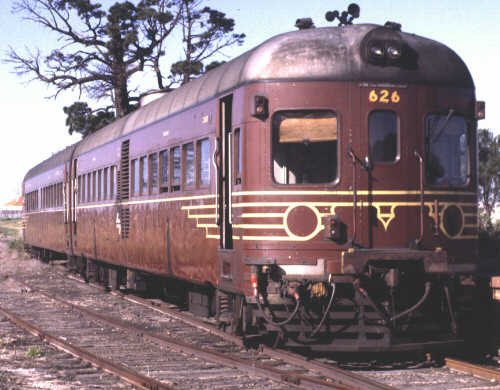 From the early 1970s, a deeper shade of Indian red may have been used.  In the same period, the designation ‘Economy’ replaced ‘Second’, but only on composite cars.  All Economy cars bore no class markings.  Thus, the 620 Power cars lacked class markings, while the 720 Trailer car was marked ‘First’ at the outer end and ‘Economy’ at the inner end.  Photographic evidence indicates that some power cars, however, did have ‘Economy’ markings at both ends.

From 1980, four of the 620/720 sets were painted in the ‘Reverse’ livery with yellow ends, simplified lining and the darker Indian red body colour.  As with the earlier Indian red scheme the trailer car was labelled ‘First’ and ‘Economy’.  Of the group modelled by Eureka, 623/723 lacked the broad yellow stripe along the bottom of the lower side panels, while 625/725 had the stripe, therefore Eureka will be modelling 625/725. 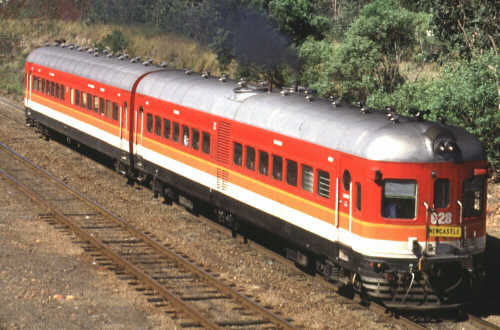 In 1982, a bright, new colour scheme was introduced for locomotives and passenger rolling stock system wide.  The ‘Candy’ scheme consisted of a bright red body, with broad white and orange stripes along the lower body side, a thin yellow stripe separating the red from the orange, a bright silver roof and pilot, and black along the bottom of the lower panels and on the undergear. All handrails and lettering were white. Most, if not all, of the sets were repainted in this scheme.

Until this time, the cars were basically unmodified in their external appearance, although various internal and mechanical changes were made over the years including the fitting of dual beam headlights.  One later modification, which did affect the appearance, was the fitting of reinforced glass windscreens which projected beyond the body line (the ‘Bug-Eyes’), however this variation will not be included in this run.